Most days he felt ill. In the morning, he woke feeling sick to his stomach, and every evening, by the time the day’s events and three bland meals had softened the sharp edges of his digestive tract, his head began to ache, at first a dull, ruthless pressure between his eyes, then a blind spot in the middle of his vision, and finally, an all-encompassing shift in his center of gravity. The only cure was a drink and two Tylenol, followed by television, and more sleep.

And he was cold. Every morning he was cold, and every evening, he shivered in rigid misery underneath a fake fur blanket on the sofa in the living room. But in the afternoon, for just one minute every day, he was warm—not too warm, but just warm enough to roll up his sleeves and open a window on the other side of the house. One day in winter, just after the mail was delivered at 3:15, he stood at the window overlooking his back yard. In the stack of mail he found nothing interesting: phone bill, garbage bill, a couple of credit card offers. His elderly father had given him a surprise subscription to Time magazine. But out the window, in the shade between the house and the hammock, he saw something unusual, extraordinary even, something that might make him feel better, forever.

It was a red envelope. A red envelope! What could be inside? He knew one fifth of the world’s population celebrated Chinese New Year, a chance to buy new clothes, eat good food, and exchange red envelopes with cash tucked beneath the center flap. He consulted a calendar, a freebie from his insurance company, affixed to the side of the refrigerator with a magnet. Tomorrow—hooray for tomorrow—was the first day of the Chinese New Year, the Year of the Pig. Once, while still employed at the Center for Global Investment and Developing Technology, he placed an order for ballpoint pens with a company in California. Because of the Chinese New Year, the pens arrived late, too late for him to try one out before quitting his job the following month. But now he might benefit from the Chinese New Year, he might collect. He donned a jacket and started for the back door.

Outside, acorns littered the patio. To find himself in such sweet light, to discover the day’s events shifting somehow to accommodate an unfulfilled wish, to feel the warm air against his skin and to watch as the wind blew an empty milk carton across the fence line—all of these filled him with hope and possibility. All he really wanted in life was for someone to say, I’m sorry that happened to you or You deserve better. No one ever said those things, though, so he had to content himself with superficial standing among the world’s grabbers and pleasers: I would like to win an unexpected prize—ten thousand dollars and a bouquet of balloons. I would like a car in the garage that not only runs reliably but also tells onlookers tales of success and prosperity. I would like a wife who willingly attends sporting events and children without holes in their bodies. I would like to fit in.

He had none of these things, of course. Instead, he had an old, dead dog buried somewhere in the back yard. He had a brother in New Mexico and a sister in South Dakota and a father right here in town, in an apartment complex meant for people too wealthy for nursing homes, too proud to move in with their adult children, and too helpless to live on their own. His mother was dead and he himself had never married. For many years he went on dates—to dance clubs and restaurants and foreign films. Then, one day, when the woman across from him at dinner began to weep, he decided to give up. She was crying, really crying. She was so lonely, she said. Even in the presence of others, especially in the presence of others, she felt so alone. He offered her a handkerchief and promised to take her home, right away, so that her embarrassment would fade. Don’t you understand, she said. There’s nowhere to go.

Now in his back yard, the red envelope signaled a shake-up. He realized he expected a similar change in the status quo every day when the mail came: today might be the day. Of course he received only consumer confidence surveys and coupons for items he never would buy. But still, every day, he hoped.

In the yard next door, he saw a tree house, newly-built since the last time he had bothered to look. Had he failed to overhear the buzz of saws and the swing of hammers, the aerodynamic rush of lumber scraps and tree branches as they fell to the ground? He looked closer. This was not a tree house, but a house without a tree, a clapboard cubicle wedged on top of three tall stilts, like a beach house built too close to the shore. Everything was like that. A tree house was not a tree house. The Chinese New Year was not the Chinese New Year. The red envelope was not a red envelope, but a flier advertising new, low rates for satellite TV. Lately he had been having trouble with his cable television—the picture skipped and certain channels, instead of playing the regularly scheduled sound, rang with a deafening, pulsing beep. Maybe he needed to replace the cable with a brand new, shiny satellite poised on the edge of his roof. Finally, a change: this is what he was after, this is what he found. Inside, after dialing the phone number on the flier, he held the receiver away from his ear, the butterfly ring-ring-ring echoing throughout the kitchen, every inch of the world awash in the golden hum of expectation.

Dinah Cox’s two books of stories are Remarkable (BOA Editions) and The Canary Keeper (PANK Books). She teaches in the Creative Writing program at Oklahoma State University, where she’s also an Associate Editor at Cimarron Review.

Picks from the Past…On Sex

And Only Light Shall Be Seen

Red and Yellow by Sadamasa Motonaga (1966) 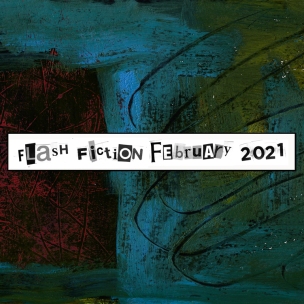 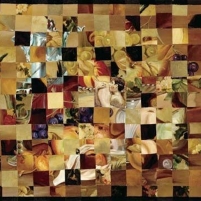