It’s the scariest time of year at Wolf ‘em Down Burgers off I-34 north of Lansing—the weekend of the classic car show—and Shea’s taking orders.

Gearheads from all over Tompkins County rolling into the plaza lot real slow, arms crooked over driver’s-side windows like go ahead, get a good look. Souped-up muscle cars and custom T-buckets parked with their hoods popped, buffed so shiny it hurts like staring at the sun. Between them, kids sweating into lawn chairs and pumping their legs, whining, ‘Daaaad, how long we here for?’

Saturday and Sunday, dawn till dusk, or till Joe with the mint-condition Drophead talks their ears off so bad they want to leave.

Two days is six square meals, plus snacks to line their bellies against the coolers full of beer. And Wolf ‘em Down is the only place to eat for a mile.

They’re the worst shifts you can get, worse than Thanksgiving or after fireworks on the Fourth of July. The weekend of the car show, you make time and a half, and even that’s not enough.

Ten times the average foot traffic, people drunk in bathrooms not worrying about their aim, kids smearing the contents of so many condiment packets onto the tile walls that you don’t have to squint too hard for it to look like blood and pus, a massacre. The cardboard cutout of the chain’s cartoon wolf mascot dented from repeated kicks to the shins.

Then there are the creeps, who saunter up to any girl cashier all classic-car confident, like ‘Do I get the handsome discount?’ and ‘Can I get a side of you?’

This Wolf ‘em Down’s mostly teens from Lansing High, plus a couple townies—manager and assistant manager—and the occasional drifter picking up a seasonal job. After the famous incident that ended in a call from corporate, it’s the workers with the most experience who get put on the whiteboard for the show. No newbies, no exceptions.

The safe bet is Shea at the counter. Looks all of fifteen, gap-toothed smile and single-use gloves size extra small. Only everybody swears she’s been around forever, and nobody can remember when she started. Could be manager if she wasn’t actually so young.

Some say Shea’s always been there, born and raised, a child of the fast-food joint. Dropped feet first into the industrial dish sink, clouding the soapy water red. Learned to walk holding a mop for balance. Instead of clamping around a mother’s teat for milk, found the stainless steel spigot of the soft-serve machine.

That’s just smoke-break chatter though, time killers by the dumpsters out back.

She did say at some point that it’s her first job.

Everybody figures she’s a good kid, anyway. Management likes that she sticks to policy: clocks in on time, wipes the tables on the hour even if nobody’s been in to use them, stacks the high chairs tall and neat. Lightning fingers on the register. Doesn’t dawdle in the freezer or switch name tags like the rest.

The workers like her too. She knows the best mixes of fountain sodas, how to unstick the receipt printer before a customer complains. She can tell you the only pharmacy-brand shampoo that’ll get the fry smell out of your hair, and the cheapest shoes that meet dress code—black, lace-up, rubber-soled—while still being okay-looking and comfortable enough to wear the length of highway to Wolf ‘em Down for after-school shifts.

Funny thing about Shea is she’s the joint’s only vegetarian. Always has been, that and tender-hearted. Sneaks a patty to any dog that passes by her drive-thru window in a truck bed. On her state-mandated lunch breaks, eats the canned mandarin oranges stocked as the healthy option for kids’ meals.

Like the car-show creeps, who order the One-Hand Burger or the Two-Hand Burger by holding their hands out in front of them in line with the girl cashiers’ chests, one hand or two, and squeezing the air. Who make each other laugh greasy laughs saying things like, ‘Sure, the food’s fast, but what about her?’

Who, a while back, took one of the girls into the back seat of a blue Mercury Cougar—another incident, though not one corporate or anybody ever talked much about. Told her to come with them, darlin’, and they’d get her a beer. Broad daylight. First shift. Electric blue, she remembered, but didn’t catch the plates.

Now before the classic car show, Shea prepares for war. This year, like every year since. Opening and closing solo, because management’s desperate enough not to bring up labor laws.

When the creeps come in with their key rings displayed proudly in the loops of their jeans, she’ll be ready. And they won’t know what hit ‘em.

But they’ll know it’s not a spatula.

Because what hits will be the whole of her, the muscle and bone of her, tendons and ligaments tensed then released. Her teeth and her claws, the feral of her. The born-and-raised of her.

And when they ask for a combo meal, she’ll give them a combo, all right.

Out from the counter: combo double jab, right hook—left knee straight to the gut.

And the whole no-meat thing. Sure, on principle. But every now and then, if a ripped throat’s the only way to shut somebody up, she’ll make an exception.

When the lights finally go out at Wolf ‘em Down, Shea will be the one to do it. Then she’ll sink into the big metal tub of the deep fryer to unwind. She likes the temperature of the oil late at night after all that sizzling. Hot but not too hot. A few bubbles and charred potato slivers rising to the surface. So nice after a day’s work, she might just fall asleep right there.

She’ll empty it first thing in the morning, right after she takes out the trash.

Kristina Ten is a Russian-American writer of short fiction and poetry, and a 2019 graduate of Clarion West Writers Workshop. Her work has appeared or is forthcoming in Lightspeed, Black Static, AE Science Fiction, Cosmonauts Avenue, and elsewhere. 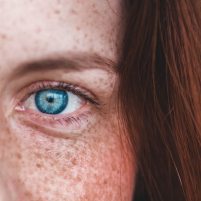 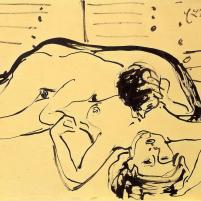