It had been a while since last I was here. Not many people return to this place once they’ve left. I know that. It was funny how nothing much seemed to have changed though—that was my first thought. Funny peculiar, that is. Still, arriving anywhere at night is always a disorienting experience, and I’m older now, of course, and maybe see things or feel things in a more disorienting way. Dr. Finch met me at the gates. He was calling something, saying something, with every other step, or so it seemed: ‘Jane…Jane…’ And as he unlocked the padlocks, said, ‘Welcome, Jane.’

He accepted this, or seemed to, as if it were normal, but didn’t say anything and didn’t offer to carry my suitcase.

The driveway was steep, and as I followed Dr. Finch, there were hazy pools of light projected by three or four tall streetlamps. When we reached the top, I was quite out of breath. A light, drizzly mist seemed to be hovering about the house. It all looked blurry just then.

Dr. Finch, breathing heavily too, fumbled for the correct key. He muttered something, an apology perhaps, because it was, after all, a chilly night and my jacket was only thin. Actually, I didn’t mind, the delay gave me a chance to look about, to reacquaint myself. The conifer trees and shrubs had grown, obviously, but I felt them responding to my return like worried things somehow, and the cracks in the crazy paving seemed alive with weeds.

‘Come in,’ Dr. Finch said, and he shouldered the door. He stepped in first and in the harsh, sudden light of the hallway, I saw how he seemed to shuffle and how he had both diminished and expanded since last I’d seen him. Time, I thought, is such a strange thing.

And he locked the door behind me.

I stood for a moment, trying to orient myself. The place was barely recognisable on the inside. Of course, it had been decorated and the furniture was new, or at least, different, but there was something else. It’s hard to explain exactly what. Perhaps that was it—perhaps I was trying to work out what exactly it was, because I didn’t notice Dr. Finch watching me.

I was careful to quickly gather myself together, but I noticed the tremor in Dr. Finch’s hands, standing, as he was, behind the Reception desk.

‘Come,’ he said, and he motioned for me to sit.

Closer to, and in that light, it was strange, the way my perception of Dr. Finch had changed. He was older, naturally, but then so was I. But his skin seemed to have taken on a darkly yellowish hue, and his teeth seemed to have grown, or perhaps the gums had receded, so his mouth looked precarious, loosened. When he spoke, that slight lisp of his now seemed absurd, monstrous even. I couldn’t imagine ever considering it cute, and certainly not attractive.

‘Sign here,’ he said, sliding a piece of A4 towards me, a plastic biro resting against the dotted line.

The movement of air between us was filled with an usual arrangement of sweet aftershave and damp flannel that made me think of school gym changing rooms. I was aware that Dr. Finch was watching me, so kept my eyes glued to the paper for longer than needed.

‘You really don’t need to read every single word,’ he said.

He was leaning across the desk. The veins in the back of his hands looked like living things and his face was set in a frown. I didn’t want to appear off-hand, so picked up the pen and issued a quick signature. Dr. Finch smiled as if there was a special secret going on between us.

And he stood, unsteadily, I thought, taking the paper with him.

‘Water?’ he said. ‘Or maybe something stronger?’

Perhaps I hesitated a beat too long, but it seemed Dr. Finch was appraising me.

‘Brandy?’ I said, to please him. And it seemed to. His face lit up, he seemed to puff out his chest.

The cabinet was in the same place as always in the corner, yet it looked somehow skewiff, as if it had suffered some kind of damage—more than just age. I watched Dr. Finch’s back, now stooped, of course, as he poured the drinks. I knew it wasn’t a particularly good idea to drink with him like that, but what else could I do? He handed me a large measure and when I took it from him, I felt, or perhaps imagined, his thumb briefly stroking mine.

He moved a chair so that we sat facing each other, our knees momentarily touching as he sat. ‘Oops,’ he said, leaning forward. ‘Sorry.’ And by way of apology, he tapped me on my knee like a magician about to produce a named playing card, then raised his glass and took a long, slow gulp. I hadn’t had a drink—alcohol, that is—for, well, I couldn’t remember how long, and I looked at the brownness of it and thought of urine and such like.

To me, the brandy tasted stale, warm. I closed my eyes momentarily when I swallowed. When I opened them, Dr. Finch seemed to have almost immediately changed. He seemed to have relaxed. I took another drink—the whole glass, gone quickly, looked at him again, and his whole constitution had definitely altered so that, to me, his movements were fluid, feminine, almost. He was asking me things: how my parents were, if I knew about certain mutual acquaintances. He spoke in the way an old friend or ex-partner might. He poured more brandy, by which time I felt I had to agree, but I hadn’t eaten and knew it was a bad idea. Already I could feel that I was in the process of colliding with a type of behaviour I hadn’t experienced for quite a while, and there was Dr. Finch talking about two girls whom I’d known years ago ‘coming out’ as bisexual, or, no, pansexual, and there was I, aware that every now and then, my laugh was very loud, and I had spilled some brandy on my skirt.

‘Here, how rude of me,’ Dr. Finch said, and although I knew he must have tried not to touch me, his fingertips brushed across my chest as he took my jacket.

‘Damp,’ he said, as he hooked it onto the back of my chair. Somehow, it felt like a boundary between us had been breached. Something to do with the proximity, and I looked up at him, at his grey beard and bloodshot eyes.

The belt buckle of his trousers was just below my eyeline and I found myself focusing on it. The weight of his hand on my shoulder was like a sudden comfort, and for something to say, I started telling him about my situation. I could feel him gazing down at me, but when I looked up, he seemed to tilt his head back and gaze away somewhere else towards the top corner of the ceiling, and he sighed deeply.

It was strange, him saying that, it was the way he said it, as if to a child, or perhaps to himself. Maybe it was the brandy—it probably was—but I suddenly felt something quite odd, a kind of willingness to experience something anew that was totally familiar.

Dr. Finch nodded. The paper I’d signed was still in his hand.

‘Yes,’ he said, and we both stood, and I sidestepped my suitcase, I’d take it up later. And he touched me once more, but only really to steer me away from the corner of the desk.

Kerry Hadley-Pryce’s first novel, The Black Country, published by Salt Publishing in 2015, was part of her MA Creative Writing at the Manchester Writing School, for which she gained a distinction and was awarded the Michael Schmidt Prize for Outstanding Achievement 2013–14. Her second novel, Gamble, also published by Salt Publishing in June 2018, was shortlisted for the Encore Second Novel Award 2019. She is a PhD candidate at Manchester Metropolitan University researching Psychogeography and Black Country Writing, teaches creative writing, and has contributed to Palgrave’s ‘Smell, Memory & Literature in the Black Country’ anthology. She is currently working on her third novel, God’s Country.

If God Wills It 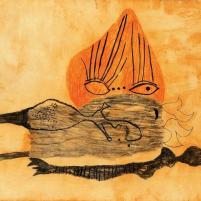 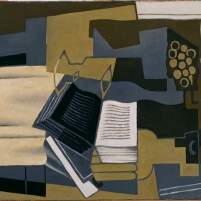 Detail from Within by Luc Tuymans (2001)