ANOTHER ENDLESS AFTERNOON meeting on Zoom. Jenna would love to turn off the camera, but it’s pretty much understood that if their team leader Michael keeps his on, they all have to keep theirs on. Everyone, including Michael, knows that with their cameras off, they might not even be at their computers. He’s droning on about updated corporate policies concerning travel, not that anyone is traveling. Jenna finds it hard to keep an interested look on her face. She tries a slight smile, but it looks fake. Does it look fake to everyone else? Are they even looking at her? She’s scanning their faces, straining to see their rooms in the background, not that there’s anything interesting to see. Kids’ sports trophies on open shelving, a stone fireplace in another rec room with family photos lined up on the oak mantel, well-tended plants on a windowsill. Does everyone live in a spacious, orderly house except her? Her laptop isn’t working, so she’s using the desktop computer in her small crowded den. She thought about straightening the books in the bookcase behind her desk chair, but it felt like too much effort. She hates staring at her face and disorganized room for hours at a time, so she tries to focus on Michael, blond, hearty, red-faced. He could use a haircut, and has been wearing the same plaid button-down shirt for a few days. But she can’t stop looking at herself. She looks unnaturally pale today, her skin crepey, the tendons on her neck ropy. She leans forward to peer closer. Is that even her? She raises a hand to her cheek and the woman on the screen raises a hand to her cheek. She leans back and the woman leans back. There’s something wrong with the picture, though. Maybe some kind of joke filter, like the lawyer who appeared on the screen as a cat. “I am not a cat,” he said, incensed, and the judge said, “I can see that,” which seemed odd, since what you could see was the lawyer as a cat. She’s seeing herself as a very old woman. She’d rather be a cat. She counts up the faces on the screen. Seven, including Michael. That would be the whole team, with no one she doesn’t recognize. Jenna’s mouth is dry. She’s desperately thirsty. The woman on the screen takes a long drink of water. How is that possible? Jenna doesn’t have a glass of water. Jenna raises her hand to brush her hair out of her face. The woman doesn’t raise her hand to brush her hair out of her face. Instead she puts down her glass and gives Jenna a long stare. Jenna considers standing up to go to the kitchen for a glass of water, but she doesn’t want to leave the meeting, which should be over soon. It’s been dragging on for almost two hours, with Michael doing almost all of the talking. There’s a long, embarrassing silence when he asks whether there are any questions. Then he starts up again. The woman on the screen seems to be trying to attract her attention. Jenna hears the refrigerator door open and close, which can’t be what she’s hearing, since she’s home alone. She thinks she hears water running in the kitchen sink. Should she get up to look? The woman is staring at her intently, as if there’s something she wants to say. Michael is going over a new power point, a series of bulleted section headings they’ll need to include in the upcoming quarterly report. It’s not a good moment to leave. The woman on the screen seems to be pointing at something over Jenna’s shoulder. Jenna knows she’s being ridiculous, but she can’t help turning to look behind her. Nothing but a disorderly bookcase. She turns back to the screen and the woman shakes her head. Jenna is starting to sweat. What is she missing? She grips the arms of the desk chair, fighting nausea, trying to catch her breath. Is she going to faint with the entire team watching on Zoom? She hears footsteps and tries to keep her gaze straight ahead, unconcerned, but out of the corner of her eye, she glimpses what looks like an old woman in the hallway. Jenna can’t breathe. Her heart flutters and she puts her hand on her chest. She hopes her coworkers don’t notice that she’s drenched in sweat, or if they do, they’re writing it off as early menopause. Who is the woman, so uncannily familiar? Is she here to take Jenna’s place? To take Jenna away? Is she dangerous? Jenna forces a smile for the video camera, more of a grimace. She tries to concentrate on Michael, who’s scheduling their next meeting. The old woman is standing in the doorway to the den now, waiting. Jenna sees herself from above and far away, as if the camera had zoomed out to show a bird’s eye view of a terrified woman hunched in front of a computer, tiny and insignificant.

Jacqueline Doyle is the author of the award-winning flash chapbook The Missing Girl (Black Lawrence Press). In addition to several publications in Fictive Dream, she has published fiction and flash in Catapult, Midway Journal, Wigleaf, Juked, and New World Writing. She lives in the San Francisco Bay Area, and can be found online at:
www.jacquelinedoyle.com and on Twitter @doylejacq. 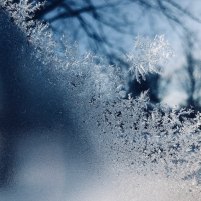